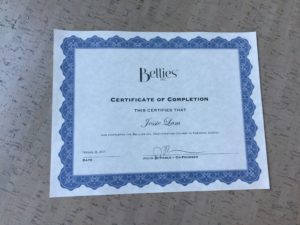 After a few months of working with a brand new mama, who had gotten the green light from her doctor to exercise, she told me that she felt like her “uterus was falling out of her vagina.” Um…come again??? I had no idea what that meant and suggested she ask her doctor. Her doctor told her she was crazy and that nothing was wrong. A few more weeks went by and my client still felt the same heaviness, discomfort, and not just during exercise, but just lounging around the house. She went for another opinion and was diagnosed with Pelvic Organ Prolapse (POP).

She started seeing a pelvic floor (PF) physio, who would teach her how to strengthen and control her PF muscles. Her physio also knew she had worked with a trainer (me) who wasn’t experience in pelvic floor issues so she recommended that I take the same course she had with Bellies Inc.

It was one of the best decisions I ever made and one of the most valuable courses I had taken.

Core dysfunction, such as POP, incontinence, diastasis, and pain, are not just limited to women who have had babies. Just because you had a C-section doesn’t mean you are in the clear. It can also affect young and active kids, women who have never been pregnant, and even men! Peeing during your CrossFit competition is NOT normal and nothing something to be proud of. Have a gap between your “6 pack abs” is also not ideal if your core is WEAK, feeling pain and heaviness DOWN THERE is not something to be ashamed of and needs to be addressed ASAP.

In parts of Europe, seeing a PF physio is part of a new mother’s recovery. In North America, sadly, most of us have never heard of such a thing. The “green light” from the doctor after 6 weeks of giving birth is not clearance for you to go back to running marathons, flipping tires, or squatting new PR’s. It is the go-ahead to see your PF physio. It can also be recommended that pregnant mom-to-be’s start seeing the physio in their 3rd trimester (situations vary of course).

I see the system evolving in the next 5-10 years (hopefully sooner), where every woman is referred to a PF physio during and after childbirth, as well as those (men and kids) who experience core dysfunction.

As a Core Specialist…

My goal is to help women prepare, recover, and restore before, during and after pregnancy. I educate my clients on the muscles of the PF and over all core, how to properly and safely exercise during their journey, and modify when needed as many exercises are appropriate while others should NOT BE DONE at all.

I also work with young athletes and even adult men who have core dysfunctions and weaknesses. This is also a great way to bridge the GAP (no pun intended) between strength training, yoga, and sports, through the awareness of breathing and core strength. It builds and reinforces the foundation so that you can become stronger and perform better at what you love to do.

I wrote an entire blog series on the core, what it is, its dysfunctions, and how to heal/get stronger. See below

There is so much about the core that we don’t know about, or that we are misinformed about, such as WHAT THE CORE ACTUALLY IS! What this program teaches should be part of basic anatomy training and it is certainly lacking in the standard weekend personal trainer certifications. After giving birth, women shouldn’t be left saying to themselves “why didn’t anyone tell me about this?” or “kegals are too hard, or don’t work.” or “I pee myself but its ok, its normal.” A lot of moms are too shy to talk about their incontinence, prolapse, diastasis, mom-tummies, and/or think this is all normal. These are common issues, but not NORMAL and CAN BE fixed.

A lot of moms are too shy to talk about their incontinence, prolapse, diastasis, mom-tummies, and/or think this is all normal. These are common issues, but not NORMAL and CAN BE fixed.

Whether you are 6 weeks or 20 years POST-PARTEM, your body is not the same as it was before your baby(ies). And yes, it CAN happen to “fit” people too!
Prevention and preparation is important for carrying your child and childbirth, and recovery and re-training is necessary post partem.
Creating that AWARENESS around our deeper muscles and stabilizers will set the foundation for the big movements by our primary, superficial muscles. With consistent practice, overtime, it will be come automatic and we can move and live life the way we want, and have that awareness to MODIFY whenever appropriate. “Surgery can fix the symptom, but not the problem.” That’s why recurring surgeries can happen.

Have a read if you are interested and learn more about your body. Contact me for more information!

Why You Need to Stop Doing Crunches…FOREVER

What is the Core?

Jessie Lam Fitness is used to identify products and services offered by Jessie Lam related to health, fitness, and nutrition. None of these products or services involve the practice of medicine or take the place of medical consultation. We urge you to consult a physician or other health care professional of your choice before undertaking any form of exercise, including yoga, or making any dietary changes, to make sure that it is safe and appropriate for you
Social media & sharing icons powered by UltimatelySocial